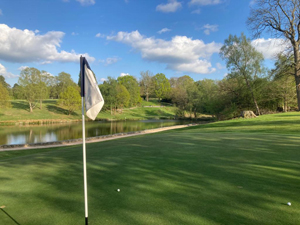 Will Extends His Record at the Spring Meeting

Will Donaldson extended his record to 12 wins of the Woodgate Cup at the Spring Meeting. In total, Will now has 42 wins in all competitions with the Society - a record unlikely to be beaten.

The day began overcast but brightened up over the day although a chilly wind persisted. In recent years, the Spring meeting has been one of the more popular events of the year, but this time numbers were down. Just 12 members competed for the Astor Cup in the morning. This was played as Greensomes as the club would not allow the suggested Texas Scrambles.

In only his second season with the Society, Howard Porter was on the winning side. Teaming up with John Rea they cruised to victory in the Astor Cup competition with 41 points. At lunch more members joined in to savour the superb jacket potatoes with bacon and cheese and to take part in the afternoon singles. 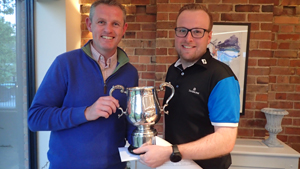 The Addison Plate competition was a closer affair with Will Donaldson just losing out by 1 point to Owen Jones. However, Will's gross score secured him the scratch Woodgate Cup by 3 shots.

Overall the course was interesting and varied. Some did comment however that it could do with more rain and occasionally the greens were a little bumpy.

The nearest the pin-in-2 shots competition was played for in the afternoon on the short par-4 5th with James Milligan taking the prize. Owen Jones took nearest the pin on the 7th although Mike Arney may have been closer in the morning but that round did not count.

Good comments were had about the choice of evening meal of Green Thai Chicken Curry, including the vegetarian option. All in all, the day was a great success and staff could not have been more helpful and cheerful.