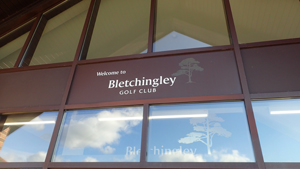 Our final meeting for 2021 was at Bletchingley GC, a new venue for the society. As normal, the AGM was preceded by 18 holes with competition for the Secretary’s Cup.

It was clear that members found the recent damp conditions and a wormcast issue on fairways difficult to contend with meaning very little run on the ball. Not surprisingly perhaps, no one broke par and Geoff Dawe’s 35 points was enough to secure the Cup. Also, the nearest the pin competition on the 17th was settled early on with Peter Millard taking the prize.

Unable to play the Mond Cup final before this meeting, Andrew Gardner and James Milligan decided to play it alongside the Secretary’s Cup. James was not confident beforehand as he had to give Andrew 16 shots. But he got off to a good start winning the first but that was short lived with Andrew storming back to 2 up after 4. 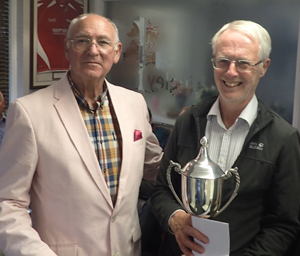 Andrew then seemed to lose the plot and by the 8th was 2 down. The back nine was more even with a string of halved holes before Andrew nicked the 14th to reduce the deficit. However, he was not able to draw level and finally lost 2 down on the 18th. Congratulations to James.

Another competition to be settled on the day was the Golfer of the Year. The leader was Will Donaldson who was not able to be at this meeting and with a total of 184 points it was down to just two members who could better that. The first was James Milligan who would need 36 points to record a final total of 185 – but it was not to be. The other was Peter Millard. To date he had only recorded 4 rounds (out of the 5 needed to qualify), so any points scored today would go towards his total. But the 37 needed was beyond Peter, so the title went to Will, congratulations.

After a hearty meal, members got down to the serious business of the Annual General Meeting. Here there was some good discussion particularly on handicapping and the future of the Hastings Challenge. Meanwhile, the President and Captain recalled the high points of the season in their reports whilst our Treasurer had forwarded a written report concluding that the accounts were in good order. Click here to read the draft minutes of the meeting.

Special thanks go to the staff at Bletchingley who looked after us extremely well and this was reflected in the generosity of members in the collection for them. All in all a very good day.