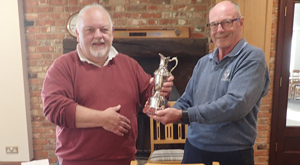 Ashdown too strong for Sparta

For the 6th time in a row, it was Ashdown that took the honours in the annual Hastings Challenge match.

For the first time, the Hastings Challenge match between Sparta and Ashdown golf societies, was purely a matchplay event. Perhaps due to that both sides struggled to encourage members to take part. In the end it was 11 a side with one singles and five pairs that took guard at a bright Westerham golf club.

Ashdown took a commanding lead winning the first three matches decisvely. In his singles match, Capt James Milligan commented that despite 5 pars and 2 bogeys in a stretch of 7 holes, he did not win one of them. In the end he went down 3 &1. In the second match, some inspired golf by Jerry Doyle kept him and in his partner in the match and at the turn were just one down. Then a disastrous run of 4 holes saw them 5 down, despite Vince coming alive at the 13th putting his tee shot on the green. However, his opponent then chipped to within 2 feet and took the hole with a net birdie. That match eventually finished 5&4 in favour of Ashdown.

Ray Owen and partner Colin Gibbons were never in with a shout in their match and they finally succumbed 6&5. There was a ray of hope though for Sparta with the next two matches going Sparta's way. It was therefore left to the last match of Anthony Ash and Gordon Rolfe to restore some pride. That they did, coming back from 2 down in the last few holes to secure a half. Sadly though that was not enough and Ashdown took the match 31/2 to 21/2.

Both sides had a nearest the pin competition on the 11tth hole and for Sparta it was Colin Gibbons who got closest.

Afterwards there was much discussion as to why both sides had struggled to get members to take part. It was agreed that previous events where singles competitions at the same time on different handicaps had caused confusion and perhaps a new format could be agreed to ensure that this event continues in the future. This will cetainly be on the Sparta's AGM agenda and hopefully something can be worked out.

In the meantime, congratulations again go to Ashdown golf society.