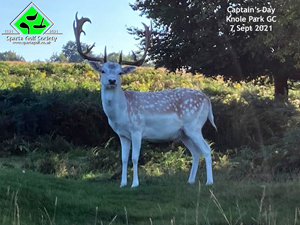 James Milligan’s Captain’s Day finally took place in early September after being cancelled in 2020 due to Covid restrictions and July this year due to the club being unable to fit us in.

However, the faithful gathered at Knole Park in unseasonably hot weather to play a course that was in immaculate condition with greens measuring 11 on the stinp meter. Not only did our members enthuse about the course they also received a great welcome and super service topped off with food to die for. Some of the comments received and passed back to the club included:

The morning round was for the Summer Tankard. Here it was originally awarded to James Milligan but after the event, the scorer noted an error on his card which meant that Ray Owen actually won by 1point. As it was initially accepted by the scorer, James was given the opportunity to keep the prize but graciously has now handed it over to Ray. This also meant that Peter Gray won the Harrop Cup outright. This cup was being played for the first time since it’s donator, Sir Peter Harrop KCB passed away in 2020. For more on Sir Peter and his relationship with our Society click here.

As Harrop Cup winner, Peter Gray was excluded from the afternoon competition for the Queen’s Golden Jubilee Cup and this therefore went to Mark Hitchen. It was one of three visits to the podium for Mark who also won two Captain’s prizes for most lost balls and the best secret pair along with Ray Owen.

A nice touch from the club was the donation of a limited print of the 8th hole for the nearest the pin prize. This went to Geoff Dawe, whilst Owen Jones took nearest the pin in 2 on the 18th. Click here for all the results on the day. 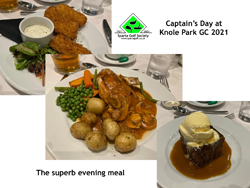 The opportunity was taken on the day for James and Mark to play their Mond Cup semi-final. Unfortunately for Mark, he found James on top form and succumbed 4&2. The final is therefore between James and Andrew Gardner. For the full draw and results click here.

With just one leg to go, the Golfer of the Year now seems to be between just five members. Will Donaldson and James Milligan have leaped up to 1st and 2nd respectively displacing John Rea and Mark Hitchen just a few points behind. In 5th is Geoff Dawe. Click here for the full table.