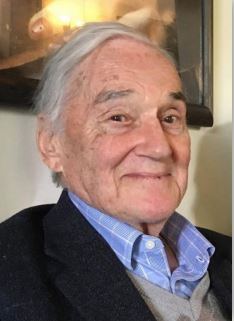 Sir Peter Harrop was the Permenent Secretary to the Dept of the Environment and, during the late 80's and early 90's was a keen supporter of the then DOE(LG) Golf Society (now Sparta).In 1994 he donated to the society a cup to be played for annually and we still play for that cup today. He was a member of Roehampton Sports Club from 1986 and that club issued the following memorial to him on his death last year:

"It is with great sadness that we announce the death of a long-standing Member, Sir Peter Harrop, who passed away on Thursday 10th September 2020 at the age of 94 from heart failure.

Peter was an active Roehampton Club Member for over 34 years and spent many happy hours enjoying the facilities. He joined the Club after retiring as a Permanent Secretary at the Department of the Environment.

Peter was a keen and very popular part of the Seniors’ golf section playing on Wednesday mornings. He also enjoyed his gentle bridge duplicate sessions and was delighted to win the No Fears Trophy, with his wife Margaret, in 2019. He was a very popular member and had a large group of friends at the Club. He will be greatly missed by all who knew him.

Our sincere condolences go to his wife Margaret and the Harrop family at this sad time.

Margaret is very grateful for all the cards and messages she has received from so many Members of the Club. Peter very much valued his activities at the Club and the many friends he made there."

Peter was a keen patron of the River Thames Boat Project which he helped foundand it is hoped that our Society can show its appreciation to him and the work of the Project by making it our charity for 2022.