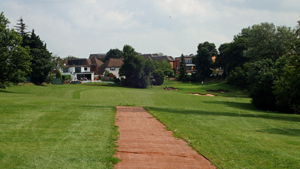 A 'Rea' of sunshine amidst the rain

Torrential rain and flash floods the day before had put this meeting in jeopardy. But the efforts of greens staff with the help of some club members had ensured that the course was not only playable but in excellent condition. The only downside was that bunkers had all but been washed away and were out of play for the day – a godsend for some of our members.

Staff commented that they had to risk the deluge to help save stock in the pro shop which had been flooded from the overflowing pond on the far side of the 18th fairway. Even fish had made it all the way into the shop!

With dark clouds still looming, the select few, who had turned out to sample this Essex gem of a course, teed off for the morning greensomes. Needless to say, with the heavy rain the greens were particularly slow but as the sun came out in the afternoon they began to dry and speed up.

James Milligan and John Hurley, who had won the Millennium Decanter as a secret pair at last year’s Autumn Meeting, were paired up again but could not get their act together here. It was left to Owen Jones and Darren Cooper to run out clear winners with 43. It was Owen’s first time on the Sparta Honours Board. 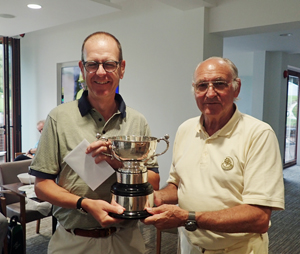 After a leisurely lunch of cajun chicken pasta – which received rave reviews from some – it was onto the main events in the afternoon. It was not long before roars were heard across the course as John Rea eagled the 7th. Don Ward, one of John’s playing partners, commented “He (John) slam-dunked it from 100 yards which sent a plume of water 4-5 feet into the air. Never seen that before, quite impressive, rather like a fountain or a salvo of fireworks. All holed approach shots should have one!”

That was a major highlight in what was a rather mediocre front nine from John. However, he stormed back on the back nine with a gross 35 to record a total 77 and win the Chapman Cup on countback from James Milligan.

Places, however, were reversed in the Robinson Bowl stableford competition where James took the honours by a point from John. James’ round included possibly the longest putt of the day when he holed out for par on the 12th from at least 50 feet away. John was not done in the winning stakes though and took the nearest the pin prize on the 10th while Owen Jones took the nearest the pin in 2 on the 16th.

The second leg of the Adams Salver was also contested in the afternoon. With the leader from the first leg at the Spring Meeting not playing at Chigwell, It was left to Geoff Dawe and John Hurley, both starting on 39pts to contest the top spot. It was not for John H on the day as he was pipped to yet another 2nd place by John R, with Geoff Dawe the overall winner on a total of 75pts.

After the round, members retired to the clubhouse to review the day and were sustained by some excellent sandwiches and chips. All in all, it was a day not to be missed.