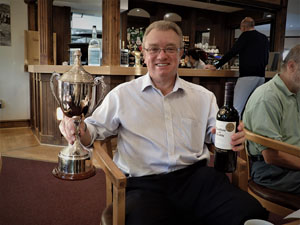 Pete has truly made this trophy his own although it took a re-count to confirm his win.

Pete was solid all day and almost achieved his first hole-in-one at the 16th where his ball stopped just inches from the hole. In addition, along with his playing partner Vince Rossiter, Pete also took the best Sparta pair prize with an impressive 45 points.

The day was slightly confusing where some were carrying three different cards as this meeting was also our annual challenge match against Ashdown (Hastings). For those who were members of both societies, there were two singles cards plus a pairs card in additon to the stableford matchplay between the societies.John Rea and Andrew Gardner also added their Mond Cup final match to the confusion. Here John Rea was unable to match his autumn meeting exploits - where he won everything in sight - and succumbed to Andrew's persistence losing 2&1. 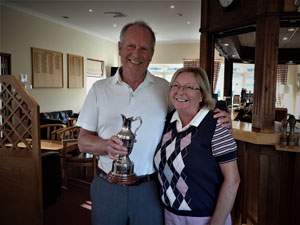 In the Challenge Match, Ashdown continued their winning run by 41/2 matches to 11/2. Needless to say it was Pete and Vince who won Sparta's only match with James and Mike adding the half. Credit must go to Captain Phil, partnered by an injured husband Kevin, who were up against Ashdown's in form Captain and Secretary but managed to take their match to the 17th losing just 2&1. Apparently, the game was incident packed, nonemoreso than when Kevin decided to drive his buggy through a ditch and grounding it. It took the efforts of all to retrieve the buggy!

The Golfer of the Year title was concluded on the day where Vince Rossiter was able to pip Andrew Gardner to take the title. Andrew did however manage a unique achievement in that he topped all the statistics tables for the year. 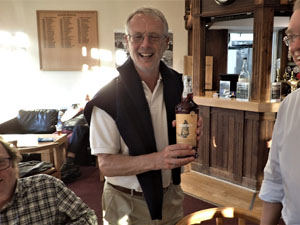 To complete the prizes on the Sparta side, outgoing President, Geoff Dawe, took the nearest the pin in 2 award on the 10th. Geoff has been President for 6 years but decided it was time to step down. In appreciation of his contribution to the Society, members clubbed together to present Geoff with a vintage bottle of Sandeman's port.

As usual there was keen discussion at the AGM it was agreed to fully adopt the R&A rule changes for 2019 - in particular 'Ready Golf' where if it is safe a responsible to, players may play out of turn. It was hoped that this would speed up play. Members were asked to make themselves aware of all the changes and although local rules could not be adopted, such as dropping out of rough or from out of bounds, the society would abide with them where they had been adopted by the club. A summary of all the change is availble on this website under Documents.

Also, the current handicapping system of the Society was discussed and it was agreed that whilst the rules would remain these should be implemented more leniently particularly when winning scores are low. Here a sub-committee of Vince Rossiter and Pete Frost would decide if any changes should be made.

Finally, allocations of posts for 2019 were agreed where current Captain Phil Ryan would step down to the general committee and husband Kevin would take over the captaincy. His choice of James Milligan for his vice-captain was agreed. Initially, with Geoff Dawe stepping down from the Presidency, it was suggested that this post should be allowed to lapse. However, the view of the meeting was that Vince Rossiter should take up this post and Vince graciously accepted.