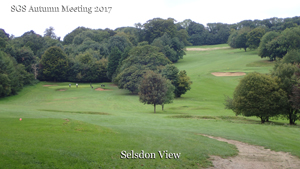 As for the weather, the forecast was for rain, rain and more rain. Fortunately, though this held off until the back nine in the morning when the rain came down with a vengeance and scuppered many a good card. In the afternoon, the rain gradually made way and the day ended in blue skies and sunshine.

It was not just the weather members had to contend with but also the greenkeepers sense of humour with many pins in near inaccessible positions. None more so than the 17th where the pin was just 2 yards on from the front and any ball putted - or in deed any ball just placed - below the hole, would end up at least 6 feet off the green! The course itself is typically Surrey, with rolling hills and steep climbs. 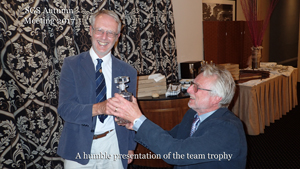 With the tough going, scores on the day were understandably on the low side with all members recording over par scores. With the absence of the Donaldsons, a new name on the Chapman Cup was guaranteed, and Peter Gray was just pipped by Pete Frost who posted a gross score of 87.

It was the same pair who topped the leader board for the Robinson Bowl, and with Pete Frost taking the honours by one point. The Spring plus Autumn competition for the Adams Salver was a different matter. Here Dave Milligan had lead from the first leg by one point over David Cooper but a poor round from the former meant the latter took the spoils with Gordon Rolfe sneaking into second spot.

In the afternoon the annual match for the Millennium Decanter between a President's team and a Captain's team took place. The decision of Kevin and Phil Ryan to change allegiances (it would not have been right for vice-Captain Phil to be playing for the President) was the deciding factor. With the match all square, the Ryan's were unable to overcome Mike Arney and Phil Patten with the result that the President's team won by two matches to one.

For the final two honours on the day it was back to the usual suspects where Pete Frost and Peter Gray bonded to post the best afternoon pairs score, and Pete Frost took the nearest the pin prize. All in all in was a great day for Pete Frost who now holds the record for the number of trophies won - 14 out of a possible 18 - pipping Will Donaldson and Peter Gray who have 13. Click here to see the Honours records. 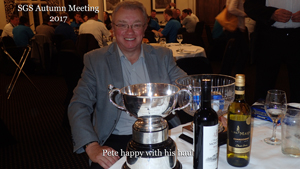 Apart from the weather, the day was slightly marred by the hospitality. There were no special arrangements for golfers who had to contend with hotel guests, meaning the bar area was packed and very noisy. Likewise the evening meal and presentations had to be conducted in the general restaurant amid the din from hotel guests. Also the golfers changing facilities were limited with only two showers available.

For a full check on the scores on the day click here.