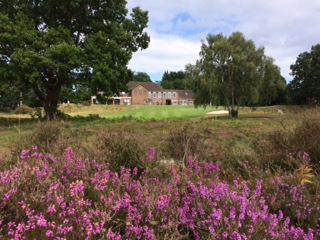 Captain David Cooper got proceedings underway on the 1st where a ditch across the fairway some 220yds away had many pondering on the club to use. However, as on many holes, getting to the green was only the first challenge - once there the slopes, subtle borrows and slickness of many greens ruined many cards.

With the difficulties in mind, anything near a par score would be in with a chance of silverware. For a while, Captain David Cooper sat in the clubhouse with a score of 35 points considering how he might present the trophy to himself. But his score was finally pipped by Mike Arney, who, even with a slow start, managed to steady the ship and return with 36 points. However, Vince Rossiter posted his intentions early with two net birdies on the first two holes and a net eagle on the 9th to take the turn with 23 points. The back-9 was a little more tricky for him but he held it together to return with a grand total of 40 points. 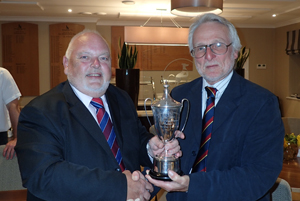 Scores were a little closer in the afternoon with three players returning with 36 points and after countback it was Andrew Cotterill who took the Queen's Golden Jubilee Cup from Darren Cooper. With Vince Rossiter also returning 36 points, he assured himself of the Harrop Cup for the aggregate score on the day, which meant that Mike Arney was awarded the DOE 25th Anniversary Cup.

Mike Arney also took the nearest the pin prizes both morning and afternoon on the 9th hole, which he birdied both times. Nearest the pin in two prize held on the 16th hole went to Darren Cooper in the morning and Andrew Cotterill in the afternoon.

As it was Captain's Day, there were other competitions devised by David Cooper to ensure as many as possible went away with something to remember the day. Embarrassingly though, his secret pairs competition, which were drawn completely blindly, paired himself with Pete Frost and their combined score was top. As such he extended the prizes to second placed Darren Cooper and Kevin Ryan 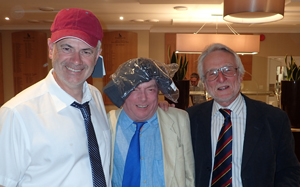 . David also decided that those who do not normally win should also be rewarded and devised a Not Usual Suspect competition which saw John Rea and Ian Dibbens taking the honours.

With an excellent 3 course meal washed down with great wine (generously supplied by our Captain) it was a superb day and even the rain held off till after we had completed our rounds.

The updated the Golfer of the Year table shows that 2015 & 2016 winner Godorn Rolfe has slipped to 5th as Vince's efforts on the day takes him to the top just one point ahead of Darren Cooper.

Gordon however retains his position at the top of the points on par-3's statistics table with an impressive average of 10 points per round. Darren Cooper, closely followed by Pete Frost, leads the net birdies table averaging nearly 5 per round. Meanwhile, Ray Owen continues to top the net eagles table but Mike Arney, with his two on the 9th today, is a new entry in the table.