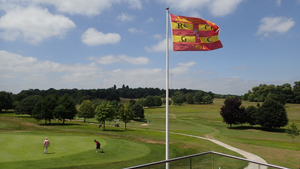 On arrival at Rochester & Cobham GC the greenkeepers were busy ironing the greens. Their slickness and undulations caught many out and the scores reflected that with just 6 points separating the select few in the morning round for the Summer Cup. At this meeting last year, Gordon Rolfe, had a clean sweep of all three competitions but was thwarted by our rule that only one trophy can be won by a member at a meeting and therefore only went home clutching the Claret Jug. This year, Gordon set about collecting the other trophies and was successful in the morning Summer Cup. Perhaps next year he can add the Cook Cup.

That rule was again applied this year, this time to John Rea who returned an impressive 35 points (off 7/8ths handicap) in the afternoon but was excluded in the Cook Cup competiton which therefore went to Andrew Gardner with 34 points. John's 69 (off full handicap) for the 36 holes on the day was unassailable however and assured him of the win in the day's premier competition for the Claret Jug.

The difficulty of the greens was perhaps shown in the lack of birdies on the day. Pete Frost, who managed to reach all par-5's in two, was the most 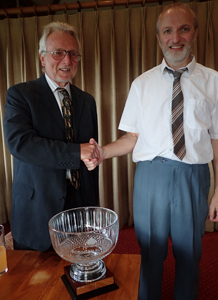 successful with 2 birdies on 2 of those holes in the morning. His playing partner, Darren Cooper, also notched up a birdie on the par-5 3rd whilst, in the afternoon, John Rea birdied the 17th and Vince Rossiter grabbed his own on the 7th.

The opportunity was taken on the day to associate Gordon Rolfe with the replacement Robinson Bowl which he won at the Autumn Meeting last year. The original bowl was unfortunately mislaid the year before and the new trophy was funded by members.

Hospitality on the day was second to none with a nice high tea of sandwiches and cakes for lunch and succulent beef followed by banoffee pie for dinner.