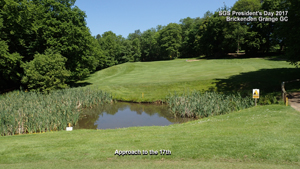 On the hottest day of the year, a select few ventured north into the Hertfordshire countryside to take on the superb and tricky Brickendon Grange course. With some struggling, Pete Frost was on fire and with help from his partner, Phil Patten, in the morning betterball, their 44 points was unassailable with playing partners, Gordon Rolfe and Patrick Aung 2 points behind in the challenge for the Pepler Cup. Pete then carried that on in the afternoon singles and his 35 points secured the President's trophy.

Perhaps Pete's best hole was the 17th. This hole had been voted by some golfing magazine readers as the best hole in Britain, and although that was debatable, it was certainly a good test. The positioning of the drive to the right half of the fairway just over the brow was important to allow a flatish lie for the second across the valley to the high green. Pete nailed it both morning and afternoon, and although he missed birdie putts he was more than satisfied with two pars.

There were other holes too that required accurate driving - none more so than the fifth. A short dog leg right par-4 to a green guarded by a tree to the right and a pond in front. Many found it necessary to lay-up with the second before they could even think of going for the green.

Last year's runaway Golfer of the Year, Gordon Rolfe, continued his trophy haul by taking the Lovell Salver when seeing off the challengers in this the second leg of the 36 hole event.