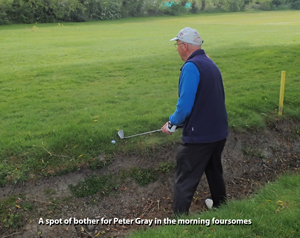 But there was a warm welcome at this historical club. Before even entering the clubhouse, one is reminded of its history by the plaque adjacent to the front door recalling that Napoleon III made this his home after exile from France in 1871 until his death in 1873. His wife, Princess Eugenie lived on here until her death in 1891.

The building not only functions as a clubhouse but also as a residency known as Camden Place, the reason it was originally built in the 17th century. The golf course came later for the use of residents and was later extended from 9 holes to 18 and opened to membership. The course is unique in that there are no less than 8 par-3's and its overall length is short at just over 5100 yards. Consequently, it is only a par-66 overall but for that it is not uninteresting and a good test. Each par-3 is different, with lengths ranging from 100 to 230 yards and a mixture of greens on high plateaus to deep valleys. Other holes have sloping fairways that make picking the right line very important to reach greens that may be hidden in hollows or round a dogleg. With ditches and water to catch out the unwary, the course is certainly not dull.

With foursomes for the morning round, it was a chance to assess the course before the singles in the afternoon. The course caught out many which kept the scores reasonable and 37 points was good enough for John Rea and Andrew Gardner to take the Astor Cup. Indeed, it was Andrew's second consecutive win in this event.

One member who certainly used the morning round to his advantage was Darren Cooper. In the afternoon, he swept away all comers with an impressive gross 71 and stableford 44 to take both the Woodgate Cup and Addison Plate. He was 7 strokes clear of John Rea and 6 points ahead of Dave Milligan in the respective competitions. John Rea took the nearest the pin-in-two on the 18th while Phil Alker was nereast the pin on the 12th; both however missed their birdie putts.

Hospitality at the club was excellent and dining in the austere, oak panelled dining room made the day very special. Indeed, all in all it was a very special day.