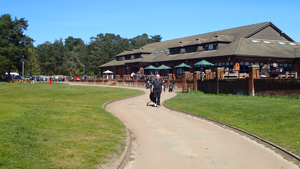 Sun and blue skies for our Spring Meet

It was a great turnout for our first Spring Meeting in two years. And the weather responded with blue skies and warm sunshine.

Due to continued Covid restrictions, it wasn’t quite the full meeting we have been used to but just 18 holes and outside catering did not put members off.

Pine Ridge is essentially a pay and play course but one would not believe it going by the condition of the course. Despite winter rules still being in place, the fairways were mainly green and lush and the greens slick and true. Indeed, there was not a bad word for the course.

James Milligan, continuing his captaincy due to the lost meetings in 2020, got proceedings underway together with John Rea, Don Ward and Mark Hitchen. 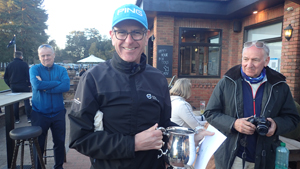 As it turned out, it was a head to head for the Woodgate Cup with James coming a close second to John Rea. John is not unfamiliar with the Woodgate Cup, this being the 10th time he has won it. That is just one short of the record of wins for a singles trophy – currently held by Will Donaldson. Close behind was Geoff Dawe who shot an excellent gross 84.

With the new World Handicapping System in place – primarily for club golfers – the Society decided to experiment with the system to produce playing handicaps on the day. Unfortunately, all did not go well as one member’s handicap was adjusted higher than it should have been. After recalculating his score it was reduced from a winning one to an also ran in the competition for the 100 year old Addison Plate. In the end, Peter Millard was declared the winner scoring an excellent 41 points. 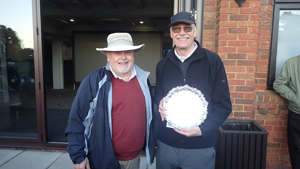 The confusion did not stop there as John Hurley’s handicap was adjusted downwards but has since been restored. As such on the day, he should have been declared in 3rd place ahead of Mike Arney – both scoring 39 points but John having a better back 6. John will be recompensed at the next meeting. Also, on 39 points and the best back nine, was Geoff Dawe who took second place.

There was no nearest the pin in two competition but NTP on the 17th proved to be a short and sweet affair with John Rea, in the first group, finishing less than 6 feet away taking the prize. Ray Owen had hoped for a longest putt competition as his 60-footer on the 12th would surely not have been beaten.

All in all, everyone had a great day with the only hiccup perhaps being the need to use a smart phone to order food and drinks – something not every member had. However, it is hoped that things will be back to near-normal for our President’s Day at Sonning GC in late May.