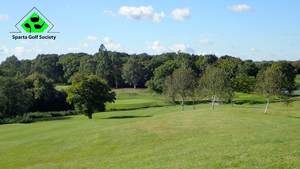 The Year for Sparta?

On the only bright day of a wet and drab week, Team Sparta took to the field for the annual challenge match against Ashdown GS.

East Sussex National was the venue this year and the course was in excellent condition despite heavy rain in the previous 48 hours. There was some confidence that this year the Sparta team would take back the trophy they last won in 2015. But there was an early set back however as one member was unable to take part leaving his partner to take on the first match single handled. Needless, to say that match was lost but parity was soon restored as the next pair of Pete Frost and Owen Jones stormed to a 45 to 43pts win. 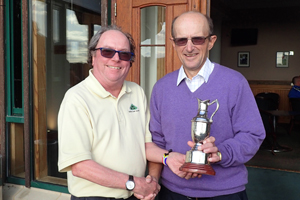 However, Ashdown retook the lead in the next match and then went 3-1 up after a close fought 4th match. Back came Sparta as Ray Owen and Phil Alker won their match by just one point. Sparta’s fate was finally settled when the 6th match recorded the biggest score of the day with 47pts on the Ashdown side. Some pride was restored for Sparta in the final match making the overall score 4 matches to 3 in Ashdown’s favour.

Alongside the match, the singles competition for the Secretary’s Cup was played. Needless to say, the best singles score came from the best pair on our side where Owen Jones recorded 38pts off a 7 handicap. However, as a guest, under Sparta rules Owen was not able to win the Cup and so it was awarded to Anthony Ash who pipped Phil Alker on the back nine.This represented the closest result since 2015 but Sparta can still hold their head high as they still lead by 7 wins to 6 in the 13 years the competition has been fought.

Owen’s partner Pete was not to be denied some spoils when he gladly took home a bottle of wine for his nearest the pin win on the 13th. The nearest the pin in 2 competition was held on the near impossible 12th but James Milligan was not to be outdone and was the only member to hit the green with his second shot.

Notes from the AGM

With ESN unable to accommodate us, the Sparta team relocated to the local Highlands Inn in Uckfield for the Annual General Meeting. Here a nice variety of sandwiches with chips was served as the discussion took place.

Both the President and Captain commented on the excellent generosity of members in supporting this year’s charity to the tune of over £1500. The charity, Pilgrims Hospices, was chosen due to the support they gave the wife of our secretary during her final weeks. 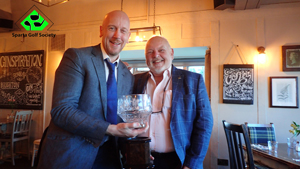 Needless to say, the main discussion was about a replacement Secretary but in the end this post has had to be left vacant with the duties being covered by the President with the help of committee members and perhaps the Captain on scoring on the day of events. The post of Asst Secretary was renamed Webmaster for which there was only one person able to fill that post.

With the presentation of the Secretary’s Cup and Golfer of the Year to Anthony Ash there was just one final presentation. The President commented that for some years, winners of the various stats lists had gone unrewarded but this year he awarded a special bag tag noting the par-3 champion on one side and most net birdies on the other to none other than Anthony Ash. Net-Eagles and net-Albatross’ champion was Andrew Gardner who will be given a similar bag tag to reward his efforts.

The full minutes of the meeting will be posted on this site soon.