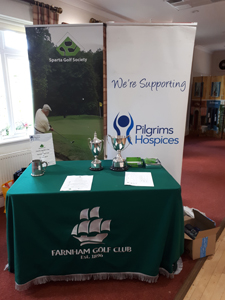 The winner is….or maybe not!

There was some confusion over who won what at the prizegiving for Captain’s Day at Farnham GC, due perhaps to a severe case of dyscalculia.

All however was resolved and, after recounts, cross-checking, verification and scrutiny of the scores, the correct winners were announced.

There was no confusion over the generosity of members when it came to donations for our charity, the Pilgrims Hospices, where £320 was raised on the day. With over £200 already raised before the event and much more promised from sponsors, the total could be over £1000 which would be an excellent result.

This being Captain’s Day, Captain Kevin Ryan lead the way across the heather of Farnham Golf Club, where some struggled to even reach the fairways and others had putting woes. One even had trolley woes: Peter Gray’s electric trolley decided it had had enough and trundled off into a ditch whilst Peter putted out on the 17th! 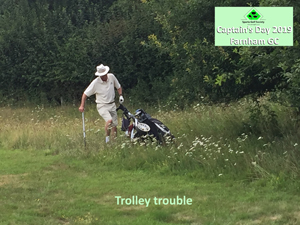 In the morning, it was close race for the Summer Tankard between Mike Arney and, new member this year, Anthony Ash, who both returned 38 points. Even a back-9 countback could not separate them but on the back-6 Mike was 1 point better off.

Surprisingly scoring was better in the afternoon with all but two players scoring over 30 points. Perhaps even more surprising was that one of those who scored below 30 points was the morning winner, Mike Arney! At the other end, Andrew Gardner had to settle for second place as Dave Milligan was finally announced the winner of the Queen’s Golden Jubilee Cup – his first ever win with the Society. 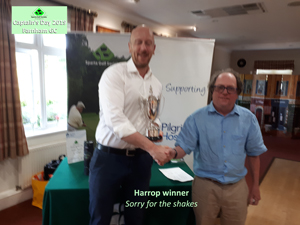 During the day, players were having a golfing feast – alongside 10 net eagles, there were 117 net birdies scored, almost certainly a record for a society meeting. Indeed, on his way to 72 points and winning the Harrop Cup, Anthony Ash had 14 net birdies himself.

With Will Donaldson taking both the nearest the pin and nearest the pin-in-2 prizes and James Milligan taking the Captain’s special prize as the par-3 champion, members settled down for a hearty carvery followed by treacle tart and custard. All in all, a very memorable day.

Golfer of the Year

Anthony Ash has put himself into first place in the Golfer of the Year table with his efforts at Farnham. He is closely followed by Dave Milligan with Andrew Gardner just a couple of points back. With just two rounds to go, it seems the title is between these three. Go to GOTY>>>

Despite his 19 points on par-3's at Farnham, James Milligan still languishes in 13th place in the Statistics. The par-3 points table is headed by our only lady member Phil Ryan, ahead of Anthony Ash. Needless to say, Anthony leads the net birdies table. Perhaps most remarkable in the Stats is that 17 players have now recorded at least one net eagle this season. Here Andrew Gardner leads the way with 5 net eagles. Andrew is also the only member to have recorded a net albatross this year. Go to Stats>>>