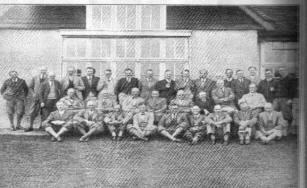 History of the Sparta Golf Society

The history of our Golf Society can be traced back 1921 when a golfing society was formed under the then Ministry of Health. The Ministry was established in 1919 to be responsible for public health but also to take on responsibilities from the Local Government Board including housing and public works.

The Minister of Health at the time, Christopher Addison, was to chair the inaugural meeting but he was moved to a new post before that took place. The first President of the Society was therefore the Rt Hon Alfred Mond MP who took over from Addison in April 1921. Also in attendance was the 2nd Viscount Astor (Waldorf Astor), who had previously been parliamentary private secretary to PM David Lloyd George before moving to the Ministry of Health as private secretary to Mond.

Other notable members of the Society at the time were Sir William Arthur Robinson, Permanent Secretary; Sir Alfred Woodgate, Director of Establishments; H A Chapman, Health Inspector and G W Pepler. We still play for trophies all the above left for competition of the Society.

Another notable member of the Society was Rt Hon Neville Chamberlain MP who became President of the Society in 1933 and went on to become Prime Minister and became infamous for the piece of white paper signed by Adolf Hitler declaring that he had no intention of invading Poland. Months later, of course he did and WW2 began.

During the war the society, with many of it's members serving in the forces, ceased to function. The early records show that the trophies were "...sent to Hood's place in Surrey for safekeeping during the war.." It does not say who Hood was but after the war, with the need for rebuilding infrastructure, the Ministry of Health lost its responsibilities for public works and housing and the trophies emerged as part of the Ministry of Works golf society. In the fifties this became the Ministry of Public Building and Works and in 1971, that Ministry together with the Ministry of Housing and Ministry of Transport became one big department under the heading 'Department of the Environment’.

Under the DOE banner, three golf societies existed - the MHLG Society (which was renamed DOE(LG)), the Transport Golf Society and the PSA (Property Services Agency) Society.

In recent years, the Environment part of the Department moved to a new area with in the Ministry of Agriculture Fisheries and Food and the remaining department became the Department Transport, Local Government and the Regions. Around that time, the DOE (LG) Society merged with the Transport Society under the name Transport Golf Society. The PSA Society ceased to be affiliated to the department's recreation association and went its separate way.

Since then, the department has further split into the Office of the Deputy Prime Minister (ODPM) and the Department for Transport (DfT). In 2004, the Society adopted the name SPARTA (London) Golfing Society to reflect the name of the recreational association it is affiliated to and to avoid the need for further name changes due to government reorganisations.

In 2005, there were further government changes and the Department for Communities and Local Government (CLG) was formed out of the ODPM. The Society now represents both CLG and DfT.